Hermès History and Value at Auction

Hermès is one of the foremost luxury fashion brands in existence today.

Demand for many of their iconic designs outpaces supply, driving an incredibly strong resale market. Now in the sixth generation of family leadership, the Hermès dynasty began in 1837, when leatherworker Thierry Hermès opened a harness shop to serve the noblemen of Paris. Thierry was a master craftsman and won the First Class Medal of the Exposition of Paris in 1855 for his harnesses and bridles. The Hermès Logo today features the image of a horse-drawn carriage, a nod to the brand’s origin. Pride in the details is a trait that has been passed down through the generations. Hermès goods are still made almost entirely by hand in France, where employees are extensively trained in the craft before they begin their precise work of stitching, coloring, or engraving. After Thierry’s death in 1878, his son Charles expanded the leather business internationally, selling luxury horse saddles and other tack to elite buyers throughout Europe, the Americas, Asia, and North Africa. In 1900, Charles and his sons designed a leather bag used to carry saddles, called the “Haut a Courroies” bag.

Invention of the Hermès Handbag:

It was Emile-Maurice Hermès, Thierry’s grandson, who developed the first Hermès handbag collection in 1922. The story goes that Emile’s wife was not able to find a leather handbag to suit her, so he created one — a miniature version of the Haut a Courroies bag. Hermès had obtained the sole European license for zippers, an American innovation, and became the first to introduce this amazing device in France, where it became known as the “Hermès fastener.” During the 1920s, Emile began introducing more handbags and accessories and opened stores in the United States as well as several locations in France. The first Hermès women’s couture collection debuted in Paris in 1929.

By the mid-1930s, Hermès had a well-established presence in fashion. In 1935, Robert Dumas (husband of Emile’s daughter Jacqueline Hermès) designed the clean and elegant “Sac à Dépêches” bag, which would later come to fame as the “Kelly” bag. In 1956, Life Magazine’s front cover featured a photo of the Princess of Monaco, Grace Kelly, ostensibly using it to hide her pregnant belly from paparazzi. Thus, 21 years after its quiet introduction, women everywhere demanded to purchase the “Kelly Bag,” and Hermès renamed the classic trapezoidal design after the iconic actress. Versions of this bag have been released in a variety of sizes, colors, and materials, and the Kelly bag remains immensely popular as a formal purse. Still handmade today, each bag takes around 18 hours to craft. Like Hermès saddles, these bags are hand sewn using the double needle saddle stitch, which, when done properly, will never unravel and cannot be replicated on a sewing machine. In the auction market, a Kelly bag in good condition may start around the $1000 mark and is likely to reach  $2,500-$10,000. Rare, limited edition or crocodile leather bags may achieve between $15,000-$50,000.

Another long-lasting Hermès favorite, the silk scarf, also originated in the 1930s. In 1937, Robert Dumas printed a woodblock design on quality Chinese silk. This durable scarf became an instant hit. Since then, countless celebrities, from 20th-century icons like Jacqueline Kennedy, Queen Elizabeth, and Audrey Hepburn to modern day pop icons like Anne Hathaway and Madonna have been known to flaunt the brightly colored scarves. Grace Kelly — often photographed with her favorite Hermès pieces — famously used a Hermès scarf as a sling after breaking her arm. Featuring 27 different colors on average, with visually intricate and fanciful designs, these silk squares are intended to make a statement. Films are painstakingly engraved — a different one for each color in the design. From silk weaving to color mixing to hand-stitching the rolled edge of each scarf, the creation of each scarf often takes upwards of 18 months due to the detail that goes into every step. These scarves retail around $395 today and are perennially popular for daily wear, as collector’s items, or even framed as art. While Hermès makes smaller scarves such as pocket squares, the classic silk scarf is a 35 inch (90cm) square. On the resell market, a used Hermès scarf in excellent condition frequently earns between $90-$200. As with most items, the rarer or antique the design, the more valuable the scarf. Certain artists also garner particular regional interest. Some of the most popular designs are chimerical abstractions by artist Annie Faivre and depictions of the wild west by Kermit Oliver (incidentally the only American to have designed scarves for Hermès). At the upper end of the resale spectrum, a highly sought after scarf with original tags and packaging may land closer to the $1000 range. When Emile Hermès passed away in 1951, his two sons-in-law (perfumer, Jean Rene Guerrand, and previously mentioned designer, Robert Dumas) took the helm and introduced the company’s luxury image to a new generation. Guerrand launched the Hermes fragrance division and much of the Hermès branding still in use today was established in the 1950s under the leadership of Dumas. In this decade, the company began using their bright orange boxes with the carriage logo and their designs were spotted on celebrities everywhere. However, by the time Thierry’s great-great-grandson, Jean Louis Dumas became CEO and artistic director of Hermès Group in 1978, the brand was experiencing a slump. Jean Louis is credited with revitalizing Hermès and turning the company into the global luxury powerhouse that it is today. He hired new designers and pushed the fashion envelope, expanded extensively into American and Asian markets, and took the company public (though the Hermès family still retains majority ownership). Yet, for all these accomplishments, he may be remembered most fondly by fashionistas for his role as the designer of the much-lauded and elusive Birkin bag.

In 1981, Jean Louis found himself on a short flight from Paris to London seated next to French actress and singer Jane Birkin. The story goes that Ms. Birkin dropped her diary, scattering papers everywhere. As Jean Louis helped her pick them up, she complained that she could never find a bag with enough pockets. After introducing himself, Jean Louis took sketches of Jane’s ideal bag and disembarked promising that he would make it for her. After some more collaboration in the workshop, a utilitarian yet beautiful handbag emerged and has been acclaimed ever since. The Birkin is a more casual, functional take on the Kelly design. It has a shoulder strap with two top handles instead of the Kelly’s single handle design and is intended to be a carry-all style. Jane Birkin loved it, and so have millions of women ever since. Martha Stewart, Victoria Beckham, and Kim Kardashian are all super fans of the Birkin bag. It’s been featured in countless movies and TV shows as a status symbol. Birkins come in a range of leathers and exotic skins and are produced in 25cm, 30cm, 35cm, and 40 cm sizes. While the demand has increased, the pace of manufacturing has not. The highly trained workers who craft these bags must train for three years before they are allowed to produce a Birkin and each one takes upwards of 40 hours to make. Each bag contains a letter stamp signifying the year of production and a craftsman stamp, identifying the individual who constructed it. Part of the mystique that surrounds this bag is its difficulty to obtain. Buying a Birkin bag directly from a Hermès store is easier said than done. The oft-cited “five-year waiting list” to obtain a Birkin is now a thing of the past. If a waiting list did exist, it would likely be much longer. Stores rarely have a Birkin or Kelly bag on display, and clerks can’t tell you when they will have the purses in stock. As of 2018, Hermès has 304 stores worldwide, including 38 in North America. Hermès is somewhat underrepresented in the American midwest. The shops nearest Kansas City are located in Chicago, Denver, and Dallas. Different storefronts offer different inventory, so even if you enter with your debit card ready, you won’t necessarily be able to exit with the item you had in mind. It almost seems like an extraordinary stroke of luck to be able to purchase a new Birkin bag directly from Hermès, though celebrities seem to accomplish this feat more frequently than the average shopper.

While supply has not increased, the price certainly has. With retail pricing currently around $11,000 for a typical version of the Birkin, many consider it to be an investment piece. Since it usually takes some influence to score a Birkin bag quickly, the auction market for these perennially popular purses is hotter than ever. Previously used Birkin bags in good condition easily achieve between $5,000-8,000 and a bag in new or “like new” condition may spark bidding between $12,000-$25,000. Rare color or leather types often send prices soaring. A limited edition ostrich, lizard, or crocodile skin bag can auction between $40,000-100,000. The Birkin also has the honor of achieving the world record several times over for the most expensive handbag ever sold at auction. In 2016, a matte white Diamond Himalaya Niloticus crocodile Birkin with 18k white gold and diamond hardware was sold by a private collector for over $300,168. When people say a Birkin is an investment piece, they may mean it quite literally.  A 2016 study conducted by Baghunter found that the Birkin bag outpaced both gold and the S&P 500, increasing 14.2% in real return value over a 35 year period! Sadly, the Birkin’s desirability also makes it one of the most frequently counterfeited bags in existence. While eBay and other resale sites have attempted to crack down on fakes, unethical manufacturers persist. When purchasing online, it’s crucial to buy your Hermès merchandise from an auction house or reseller you trust.

If you have a Hermès piece you would like to have evaluated or considered for auction, our appraisers would love to hear from you. While handbags and scarves are usually the most looked-for Hermès items at auction, collectors and aesthetes also seek after the brand’s jewelry, watches, clothing, shoes, dishes, furnishings, and yes — even saddles.

END_OF_DOCUMENT_TOKEN_TO_BE_REPLACED 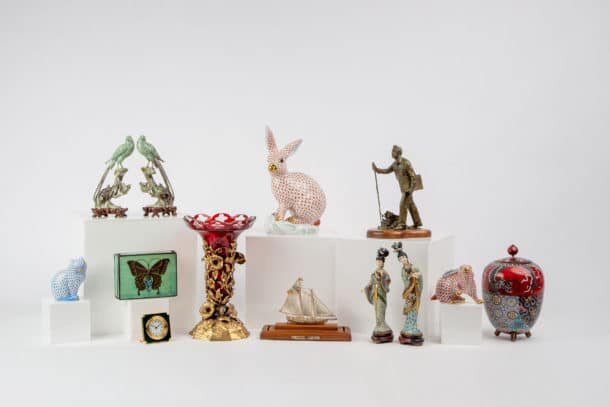